The Los Angeles Police Department (LAPD) is the police department for the City of Los Angeles, California.

The current Chief of Police is Michel "Mike" Moore. He was appointed to the position on June 27, 2018. Chief Moore is in charge of the third largest police department in the United States, managing 10,000 sworn officers and 3,000 civilian employees.

The LAPD in the Major Crimes Universe Edit

The Los Angeles Police Department featured in the Major Crimes Universe is fictional, although the department's organizational structure is based on the organization of the real LAPD from 2005, the year The Closer premiered.

When Thomas Delk was appointed as the Chief of Police in Season 6 of The Closer, he planned on restructuring the department. Delk created a new organizational chart which was seen in The Closer, Season 7 premiere “Unknown Trouble”, which would have modified the Major Crimes Universe LAPD's organization to match the real LAPD organization of the time. Before Chief Delk could make the changes public, he died of a sudden brain aneurysm.

Some changes that have happened in the real LAPD after 2005 have been mirrored in the Major Crimes Universe, including the creation of the RACR Division and two geographical areas, Olympic and Topanga, which were added on January 4, 2009. 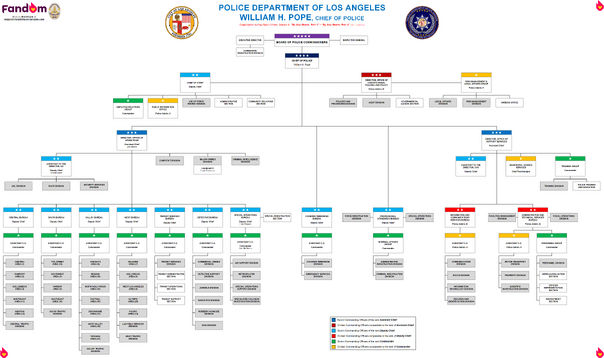 Current organization of the real LAPD for comparison. (.PDF Version) Source
Add a photo to this gallery

Major Crimes, Season 6, until "By Any Means, Part 1"(.PDF Version)
Add a photo to this gallery

The current headquarters of the LAPD is the Police Administration Building (PAB) which opened in October 2009. It replaced the aging Parker Center which was named after Chief of Police William H. Parker, who died of a heart attack while still in office in 1966.

In the Major Crimes Universe, the move from the Parker Center to the PAB happened in “The Big Bang” of The Closer, Season 6.

The Police Administration Building houses the Office of the Chief of Police, the Office of the Director of Operations, and the Major Crimes Division, among others. These offices were previously located in the Parker Center when the building was still in use.

In the Major Crimes, Season 5 finale, “Shockwave, Part 2”​​, the PAB was the target of a bombing, severely damaging it's ninth floor, which houses the Major Crimes Division (MCD) and the Office of the Director of Operations. The bomb detonated in the offices of the Major Crimes Division, but most of the damage was contained within, with other rooms suffering only dust and debris damage. There were no casualties in the attack. In “Sanctuary City, Part 1”​​, the building was shown to be completely fixed.

Office of the Chief of Police Edit

The Chief of Police is the highest-ranking officer who directs, plans, and coordinates the enforcement of laws for the purpose of protecting persons and property, and for the preservation of the peace in the community.

The Professional Standards Bureau (PSB) reports directly to the Chief of Police and it is the investigative arm of the Chief to identify and report corruption and employee behavior that discredits the LAPD or violates a department policy, procedure, or practice.

The current command of PSB and its divisions is unknown.

The Consent Decree Bureau was created following the discovery of the LAPD's Rampart Area Corruption Incident. The United States Department of Justice notified the City of Los Angeles that it intended to file a civil suit alleging that the Department was engaging in a pattern or practice of excessive force, false arrests and unreasonable searches and seizures.

The Counter-Terrorism Bureau (CTB) provides counter-terrorism resources to the department, including the Bomb Squad Unit, the LAX Bomb Detection K-9 Unit, and the Hazardous Materials Unit (HAZMAT). The Counter-Terrorism Bureau is also responsible for investigating acts of terror and person(s)/group(s) who plan on committing or financing acts of terror.

Current command of the Counter-Terrorism Bureau and its divisions is unknown.

The Office of Operations has functional control of all field law enforcement, special operations, and detective operations throughout the city, overseeing the four geographical bureaus of the department as well as some specialized bureaus and divisions.

The Criminal Intelligence Division (CI) is responsible for gathering intelligence on criminal organizations, investigating organized crime, assisting other units in the investigation of serious felonious crimes, and developing strategies for crime prevention as it relates to terrorism or other major crimes.

Current command of the Criminal Intelligence Division is unknown.

Current command of the Detective Bureau and its divisions is unknown.

At the end of Season 1 of The Closer, Russell Taylor is promoted to the rank of Commander and he becomes head of the Robbery-Homicide Division after his predecessor, Commander Scott, retires.

After Commander Taylor transferred out of RHD in Season 4 of The Closer, it is not known who assumed command of the division after him.

The Office of Support Services (OSS) oversees the department's information and communications services and matters related to personnel and training, LAPD facilities, vehicles, and fiscal operations.

The Scientific Investigation Division's (SID) mission is to collect evidence at crime scenes or from suspects and victims, and process it at the Regional Crime Laboratory.

The Behavioral Science Services (BSS) is responsible for planning, developing, implementing, and administering the psychological services program of the LAPD. Behavioral Sciences is staffed by trained psychologists who specialize in law enforcement-related situations and crises.

The Communications Division maintains the dispatch center for all emergency calls within the City of Los Angeles.

The Information Technology Division is responsible for planning, developing, implementing, and supporting the IT systems and networks throughout LAPD.

For the complete list and description for all of the police ranks of the LAPD, please visit the Ranks of the Los Angeles Police Department page.

Officers will be awarded service stripes for their long sleeved uniforms to be worn above the left cuff. Each stripe represents five years of service in the LAPD.

Note that the Major Crimes Division is not usually seen in uniform, therefore their service years can not be accurately determined.

Adopted in 1940, the LAPD Series 6 badge is oval in shape and it features a representation of the Los Angeles City Hall and the city seal, as well as the officer's rank and badge number.

Badges used on the show are not real LAPD badges as they are protected by copyright. They feature minor differences in the design of the LA City Hall, center seal, and in the font used as well as in the star insignias of higher ranking officers, while still keeping the iconic and easily recognizable look. Only TV-shows ever to have featured authentic LAPD badges are Jack Webb's Dragnet (1951–1959 and 1967–1970) and Adam-12 (1968-1975), made with cooperation of then-LAPD Chief William H. Parker.

Ranks from Police Officer to Captain have a badge number for identification and ranks from Commander to Chief have their symbol of rank in lieu of badge numbers.

It should be noted that the main cast of both The Closer and Major Crimes wear the same badge in nearly every episode. Only a handful of continuity errors can be seen in regards to badge numbers.

Commander's badge as seen in the Major Crimes Universe

Sometimes when the MCD detectives go to arrest suspects or on stake-outs, they wear the LAPD Windbreaker. The jacket features the patch of LAPD on both sleeves, picture of the LAPD badge, and the text Los Angeles Police for easier identification of plain-clothes officers to other law-enforcement and possible suspects.

A different version of this jacket can be seen worn by Buzz Watson with the police identification being replaced by the text "SID". This is used do differentiate sworn law-enforcement officers from civilian investigators employed by the Scientific Investigation Division (SID).

The LAPD has used the Crown Victoria Police Interceptor (CVPI) since the first generation was introduced in 1992 and continues to use the second generation CVPI, which debuted in 1998 and remained virtually unchanged until it ended production in 2011.

After the CVPI ceased production, the LAPD has been slowly replacing its aging fleet of CVPI's with Dodge Chargers and the new Ford Police Interceptors.

The CVPI was the main vehicle used by the cast of The Closer and Major Crimes, although in the most recent seasons of Major Crimes, the MCD detectives have had their CVPI's replaced with more modern vehicles.

In 2008, the Dodge Charger LX Police Special was approved for duty within the LAPD. It shared patrol duties with the CVPI and has since become the primary patrol vehicle of the department after the CVPI ceased production.

A black 2011 Dodge Charger was used by Det. Julio Sanchez during Major Crimes, Seasons 2 & 3. A gray 2011 Dodge Charger is used by Cmdr. Sharon Raydor and Lt. Andy Flynn in “Sanctuary City, Part 1”​​. This is most likely Raydor's new vehicle considering her promotion to Commander and the fact that Lt. Flynn has a Ford Police Interceptor Utility, as noted below.

The LAPD is starting to increase it's numbers of the Police Interceptor Sedan for patrol duties from the few that they originally had, as new model years have improved the vehicle significantly.

The Police Interceptor Utility is seeing use in patrol capacity but it is more prevalent for select patrol supervisors because of the extra space offered by the SUV for command equipment or personal protection, and special duties including SWAT, detectives, and commanding officers.

The change to these new vehicles was mentioned in “Turn Down”​​, after Lieutenant Flynn complained to Lieutenant Provenza that Reserve Officer Buzz Watson gets "The Batmobile", while they still drive a car from the nineties, referencing the Ford Police Interceptor Utility and the Ford Crown Victoria Police Interceptor they drove at the time, respectively. At that point Buzz Watson remarked that the vehicle wasn't for him, rather that the entire LAPD is moving towards the new vehicles.

After that episode, it appears as Lt. Provenza has had his old CVPI replaced with a gray Ford Police Interceptor Utility, even though he had trouble even starting the vehicle in the previous episode, let alone using it in a official capacity.

It appears that in Season 5, Lieutenant Flynn has also had his old CVPI replaced as he can be seen driving a silver Ford Police Interceptor Utility, most notably in “Foreign Affairs”​​ and “Moral Hazard”​​.

NOTE: Because of the large quantity of call signs in use with the LAPD, this list only includes those that are relevant to the Major Crimes Universe. Also note that these call signs are very rarely heard and therefore they are mostly speculation, based on the LAPD call signs from 2005.

The LAPD, along with other local and state law enforcement agencies in California, uses the APCO radiotelephony spelling alphabet rather than the NATO phonetic alphabet. As such, the phonetic alphabet is as follows:

Retrieved from "https://majorcrimesdivision.fandom.com/wiki/Los_Angeles_Police_Department?oldid=23689"
Community content is available under CC-BY-SA unless otherwise noted.